Yesterday there was an alert for strong solar activity and last night I saw the northern lights from my balcony in the city so I decided I would grab my bike and have a ride up to the top of the hill outside the city so that there was no light and no people and just for a bit of an adventure!

My bike light was completely out of battery so I charged it for about 30mins before I went out but the connection to charge it is a bit dodgy so I had no idea if it was charging or not and couldnt wait any longer so just went out, it had some charge at least. I went to the viewpoint up above my house where you can see the whole city but there was like 10 people there and the bright streetlights meant you could hardly see much anyway. I decided I would try and go up to Geitfjellet which has an open rocky flat top and you can see for miles in ever direction. Off I went with no lights on and just trying to get my eyes used to the darkness so I could ride without a light and I would try and save my light for the way back down it kind of worked but it was really difficult and as soon as I went into any trees I had to put some light on as it was too dark.

I cycled up out of the city and along the fire road for a bit where I didn’t need the light then headed up a path which I knew would take me up to the top of the hill the quickest, again I tried not to use my light and it was actually better when there was snow because the while reflected more light and you could see the ground. I tried to take a shortcut on my way up, but that was a bit of a bad idea since it was dark and I didn’t really know the way, that was quite strange, just trudging through the trees on no path at all, through the snow, in the complete darkness not really knowing where I was just in roughly which direction the path I needed to be was in. In the end I got a bit disorientated and ended up back on the path I was trying to cut out with my shortcut (I was might pleased with myself for recognising this tiny bit of path I had done only once a few weeks ago in the pitch black and that I knew where I was again).
In the end I got my phone out and used the light on that as the light for going up hill, it was much quicker going being able to ride up the hill but it meant that I had to kind of hold the phone against the bars in my left (so I couldn’t use the brake with that hand) and only have the right hand (front brake) in use. Yeh, riding on ice with only the front brake isn’t the greatest idea.
I got to the top and even though the lights were not that strong it was in every direction, I must have spent half an hour there just watching everything, the view down over the whole city with the green lights above was pretty amazing and in the other direction it was dancing around behind the trees on the horizon. I got a pretty cool photo of the green illuminating the sign at the top of that hill. That was a pretty surreal experience just lying on my belly on some rocks at the top of a hill, in the pitch black, on my own, watching the whole city and the northern lights. 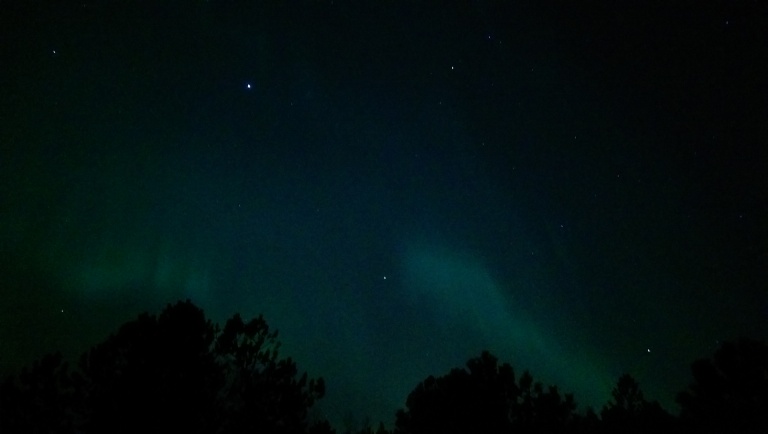 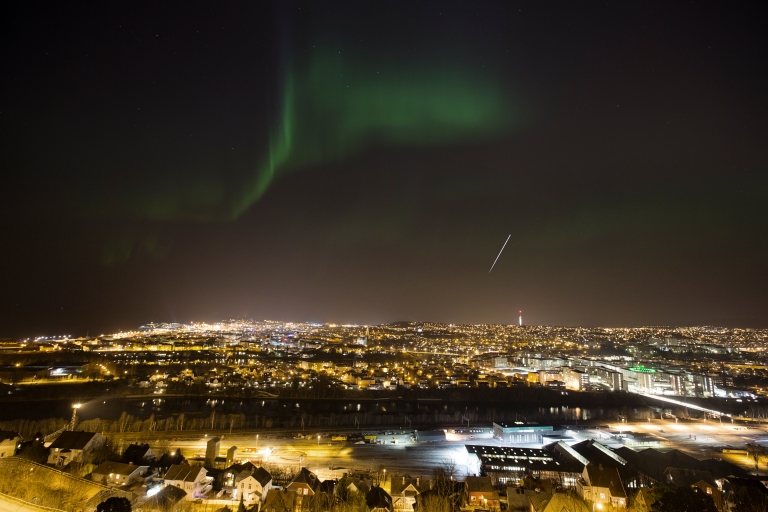 One thought on “_76 Ride Under the Northern Lights”